The urban area of Puerto Lumbreras is divided into two separate areas, with the Rambla de Nogalte as the passageway between the two, making this zone a strategic place within the city and an essential link connecting the two banks. These characteristics make the Rambla an area of heavy traffic and a point of reference in the town, for both the inhabitants and visitors of Puerto Lumbreras.

The field of action for this project lies in the two previously existing bridges that serve as pedestrian or vehicle crossings, as the case may be.

The Project of “Adaptation of Public Spaces, Urban Footbridges – Banks and Adjacent Urban Areas” responds to certain clear needs in relation to the pedestrian and vehicle traffic conditions along the Rambla de Nogalte, and to the efforts being made to improve the level of services in the city for both residents and the development of tourism. This is seen in the continued sustained growth of the city, together with the periods of intense cultural activities and festivals.

Because of its location, the project aims to improve the quality of the city’s central public space, paying special attention to the traffic patterns between the two areas comprising the metropolitan area of Puerto Lumbreras and its geographic expansion. In its conceptual basis, it seeks to give priority to pedestrians – “the pedestrian is the protagonist” – in both circulation and recreational areas, improving their situation with regard to vehicle traffic and accessibility at the points where the Urban Footbridges meet the city, due to the difficult features of the terrain at the meeting places with the urban banks.

In addition, these improvements aim to give the set of bridges/footbridges a unique presence, connecting the two banks of the Rambla and, thus, the city, which was divided in two.

Based on these premises, the project was implemented on five levels of action:

– Making the bridges/footbridges larger, with more area for pedestrians and less for cars.
– Reinforcing the current structure of the bridges/footbridges.
– Solving the issues of accessibility at problematic points and urban meeting points.
– Turning “THE PORT DOCKS” into places for connection between the two banks and making them a reference point in the city, as public spaces for use by residents and symbols for tourists.
– Generating long-lasting, low-maintenance, resistant construction systems.

“The Port Docks” are for everyone, young and old, for residents and visitors alike to go for a stroll, meet and spend a pleasant time together. During the day, and at night: plays of colors and textures, shade during the day and light at night. The interventions on both the pedestrian and mixed-use (pedestrian and vehicle traffic) bridges/footbridges involve two basic features: a new deck-support structure and complementary metal rings. The new footbridges are the result of a recycling/treatment process applied to the current ones.

Regarding the structure, the decision was made to maintain the main existing structure of piles and beams. After making the necessary structural repairs to them, they were complemented with the new horizontal deck-support, which absorbs the structural alterations and changes needed to increase the dimensions, improve pedestrian traffic and enhance the features of the space generated.

The illumination allows us differing perceptions of the bridges/footbridges and their surroundings during the day and at night, and varying sequences in contact with audio/visual art.

The pedestrian traffic zones are paved evenly, with quality grades adapted to their scale and usage. They are made of bright colors and textures – colored asphalt, rubber, wood and artificial grass. The highly compact and resistant pavements with innovative textures require only reasonable maintenance.

In the areas for vehicle traffic, hot mix asphalt paving highly resistant to the effects of vehicle traffic was laid and sections with colors and textures indicating the different zones were also included. 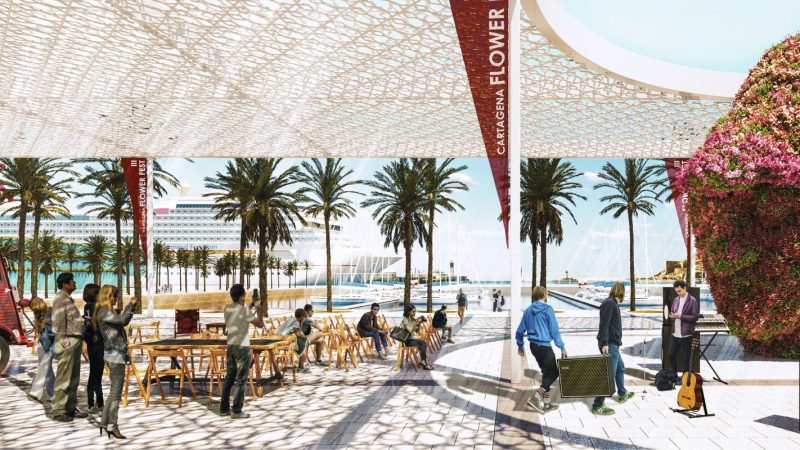